Asia is the largest continent that holds some of the world’s oldest civilizations. Given that the continent is old and it also constitutes around 60% of the world’s population, Asia is very rich in its cultural roots and history. Hence, it’s full of distinctive cultural festivals that depict each nation’s unique traditions. From the world’s famous Chinese New Year to the Holi Hindu mythology.

We came up with a list of the must-see cultural festivals across Asia , that will illustrate a significant experience you won’t be seeing elsewhere. 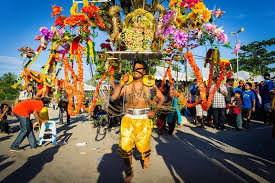 This is a major religious festival for Hindu followers. It is held on the night of the full moon in the Tamil month of Thai.
Attended by millions of locals and thousands of tourists witnessing this spectacular event take place.
While attending the festival, make sure to visit the impressive limestone caves in the Batu area and also there are 3 indoor galleries. An art gallery, a reptile gallery and the Valluvar Kottam.

This colorful festival is colorful for a very obvious reason. It marks the beginning of spring and celebrates the triumph of good over evil.
In Hindu mythology, this festival resembles the time to end all conflicts and appreciate loving each other, celebrating that by throwing vibrant rainbow colored powder at each other.
Holi is considered to be the most important festival in the Hindu calendar.

The Boreyeong festival is relatively new, compared with other festivals across Asia. It started taking place in 1998 and was actually born out of a marketing campaign to promote cosmetic products, rich in mineral mud products found in Boreyeong.
Since its turning into an international event, Boreyeong mud festival has become so popular to Koreans and tourists alike. It has grown to an excess of 2 million visitors annually.
This event is full of various mud-related activities, such as mud wrestling, mud massage, mud sliding, mud skiing, colored mud body painting, swimming in pools of mud, mud spas and ending in a brilliant mud fireworks display and dance parties.

4- Chinese New Year (All over Asia) 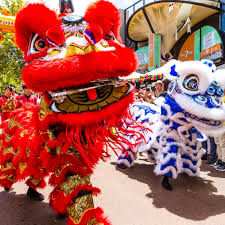 The Chinese New Year is celebrated all across the continent and the world.
It is normally s three-day festival celebrating old and new traditions, sounds and flavors.
The highlight of the event is illustrated with dragons and lions walkers, jugglers and acrobats. Along with party vibes, magic shows and fireworks.
Singapore is considered to be the best place to witness a Chinese New Year’s festival, Due to its joyfu and spectacular vibes and shows for three days straight.

Winter Light festivals are very popular in Japan, especially in Nabano No Sato park in Kunawa. The park is significantly large, full of some iconic greenhouses, colorful flower gardens and the perfect landscape for a winter illumination event.
Mesmerizing installation of millions of LED lights, creating magical and breathtaking shapes and designs all over the park.
The decoration revolves around a different theme every year. Some of the previous unforgettable themes were the tunnel of light and the illuminated version of Mout Fuji.